Domme day in the Park

I haven't posted about an adventure in a while, mostly because having a job is taking away from my adventure time. Last week, when I had the day off, I knew what I had to do.

I have been in New York for almost 2 years now and have never spent time in the park and with the forecast of sunny with a high of 75, there was no debate. I packed a bag and headed to the park, I texted some friends to meet me there.

One friend brought a picnic lunch and as we feasted on decadent salads of cheese and fruit and nuts and vegetables, we noticed this majestic woman in a long dress with a hula hoop. Turns out it was none other than Gigi The German Mistress, one of the friends I texted to meet us!

I was thrilled and she came over with her German gear and joined our picnic. We finished the picnic and the champagne and my friend had to leave, leaving a buzzed Gigi and me alone in the park.

We decided this will not do.
We took to Twitter, we needed alcohol and someone to entertain us.
While we waited for someone to arrive with more liquor, we set out of a mission.

"LETS OBJECTIFY MEN IN THE PARK," I declared and objectify men we did!

We lured over some young boys and made them feel like meat. They had no idea what to do and when We hinted and what it is that We enjoy inside of the dungeon, they suddenly had to go. What silly little boys.


Shortly after, a boy arrived with the liquor We requested and Our fun continued.

I decided I needed to climb a tree, it is no secret I am in touch with My inner child. I NEEDED to be in the tree. I couldn't reach the first branch, so like the good boy that Our boy is, he quickly offered himself up as ladder so that I could find My perch in the tree.

It was lovely looking down at people enjoying the park on a perfect day.

Eventually, it was time to come down and we continued again with our mission.

We used a whistle to get the attention of another boy and quickly intrigued him.

"Do you like older women?" The German Goddess asked coyly.

The boy blushed and didn't know how to respond.

"Do you want to see my boobs?" The German Goddess asked.

And then The German Goddess toyed with her dress, only to produce a sticker of cartoon boobs that Our boy had given her when he arrived with the alcohol. The poor boy looked almost relieved, because he would have had no idea what to do if She had actually pulled out a boob. He then had to go find his friends.


We then whistled and yelled at passing men.


"Its like watching two Lionesses on a hunt where I have befriended them just enough to not be prey, but not enough to feel entirely safe and protected," Our boy confessed to Us as he rubbed The German Goddess's feet. 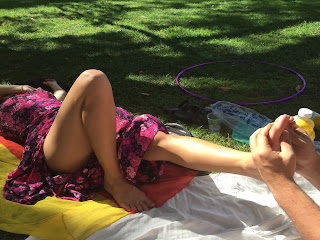 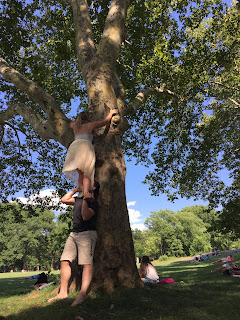 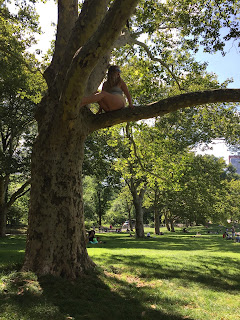